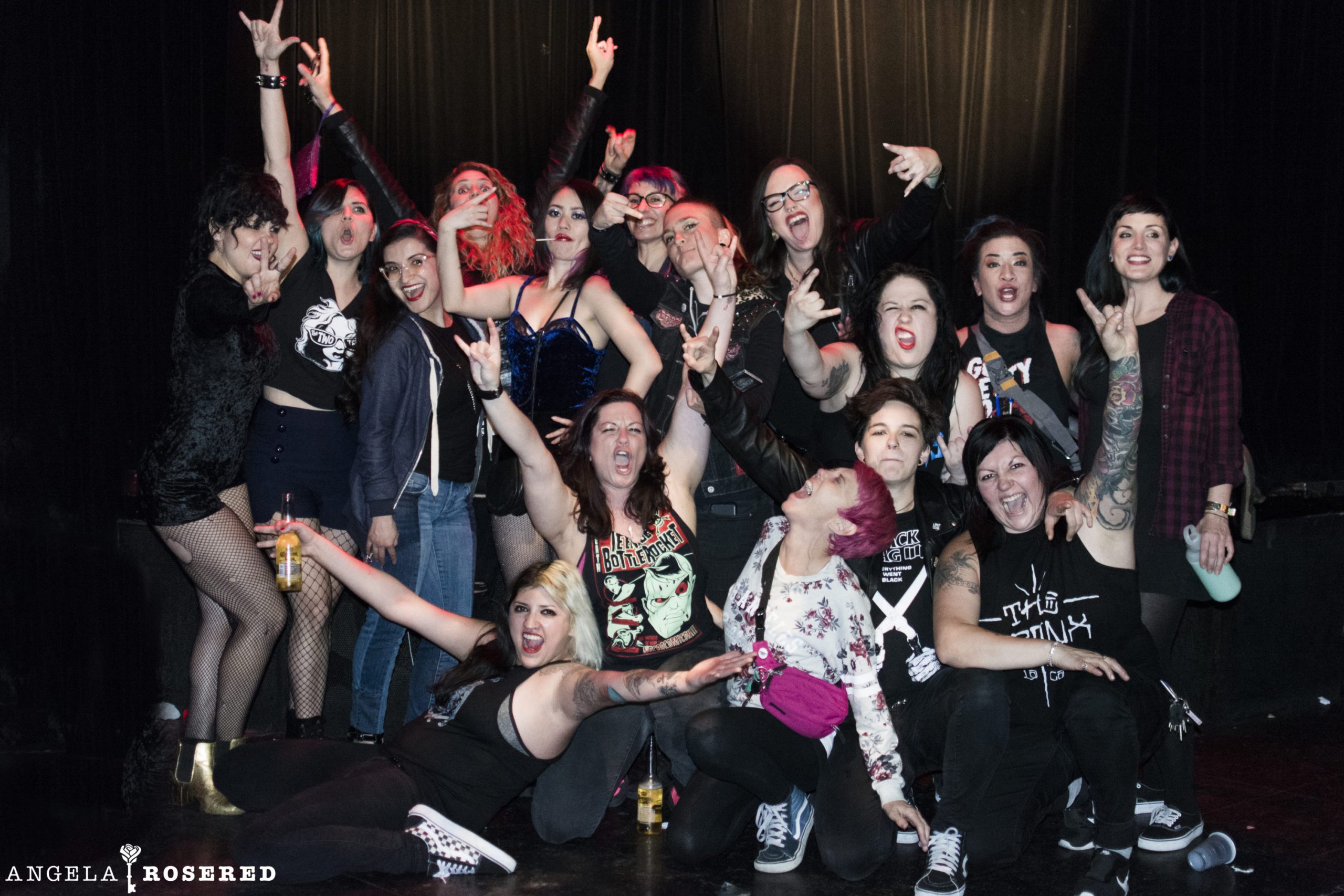 Life changing concerts can be few in far between. Yes, every live musical event is its own unique unicorn from the good to the bad and well sometimes embarrassing. I love all ends of the spectrum, but those mind-altering shows that rock your core can leave an unforgettable imprint. Somehow, I had the lucky fortune of experiencing that music milestone for three punk rock nights alongside women who breed comradery through expressionism.

Like most random experiences, it all started with a social media interaction. Drea Doll, the frontwoman/guitarist from the Venomous Pinks, was promoting the then-upcoming Girl Gang tour with California’s Bad Cop / Bad Cop, Go Betty Go and The Glam Skanks. Having some history photographing the Pinks and harvesting a serious fangirl obsession for the rest of the bill, I jokingly replied to her post, “Want me to crash on your hotel floor and document/photograph the experience?” Next thing I knew, I was submitting vacation time at my corporate day job, packing my gear with a sleeping bag in tow to join the Pinks on their last three stops on tour. I was unable to attend the kick-off gig in Las Vegas, so I tagged along for the remaining dates. Never the less, I was just as amped to cover the second stop even though it was right in my hometown Tempe, Arizona. Rightfully so, the venue was at the Yucca Tap Room which is known for its intimate setting with shows that truly rage. That night was indeed no exception. The crowd was packed, but this did not stop me from joining the rest of the photographers who claimed their space on the ground in front of the stage. Fans stumbled and shoved one another on top of us, which only fueled my excitement. Photographer veteran and one of my personal artistic heroes David LeRoy Hunsaker were amongst many who were shooting at the front. He kindly offered some of his lenses to use which made my shots and night that much more memorable. All the bands played with high energy while feeding off the crowd who wanted more.

The next day I loaded up the van with The Venomous Pinks’ band members Drea Doll, Gaby Kaos, Miranda Duffy and Julie Neff along with their merch babe Ashley Berkowitz. We traveled a few hours away to another staple Arizona venue, The Greenroom. Since there was a lot of time between sound check and show time, all four bands were getting to know one another better, taking selfies and helping out where it was needed. It was a very united vibe from start to finish, which was refreshing. Meanwhile, I was able to get to share trade stories with Billy Skelly, owner, and photojournalist of 99% Magazine. To be honest, when someone told me he was on tour documenting Bad Cop / Bad Cop  I wanted to stay home because his photography skills are nothing short of extraordinary. I was pleasantly surprised to find out that Skelly is one of the most approachable and humble photogs I have ever encountered. He was eager to give words of encouragement and share pointers. It’s safe to say we became fast photo buddies. One of the most distinctive aspects of this show is that it was all ages. Witnessing mothers taking their little girls to see these badass woman rage the stage was nothing short of inspirational. Doll’s little cousin was in the crowd gazed at her with admiration that gave me hope for our next generation of lady warriors.

Next stop was California to rock The Viper Room. This marked my first visit to the infamous club, and it did not disappoint. Standing in a venue I had only read about, really turned my “small town” switch on and in some way made the night that much more significant. Like a scene out of a movie, I quickly ran into people who I only knew as social media accounts. Every face in the packed crowd was punk rock beautiful, illuminated by the lighting of a stage with a moving curtain that closed between acts. Hollywood vibe aside, the most exhilarating part was the dynamic of all the bands who served harder than ever before. The Glam Skanks slayed with their glittery unapologetic sexy sounds that always demands respect. Followed up by my ladies, The Venomous Pinks who thrashed with an intensity that was pure punk fucking rock at heart and left the swarm wanting more. Their performance made me proud to call myself an “Arizonan that is with the Pinks.” Go Betty Go came in with their energetic set that always encourages their fans to accomplish what they want in life. During their set, I witnessed a former singer share the stage with the current vocalist. Also, the touring bassist stepped aside to cheer on the full-time lineup. It was musicianship like I have never witnessed before. Lastly, Bad Cop / Bad Cop displayed flawless harmonies and a tight set. They cheered while making “fuck Trump” speeches and also brought awareness to deeper issues like suicide prevention. I was so captivated that I sung at the top of my lungs almost forgetting to take photos. As the tour came to an end, it was apparent that the connections made between musicians would be longstanding.

Looking back, I realize seeing musical idols play alongside the hometown heroes gives a sense of accomplishment that is outside of oneself. It was a tour filled with ladies of all ages and background building one another up instead of tearing each other down with competition. In some aspect, the  member of each band on tour became a friend; even those who may not remember my name a year from now or even knew it in the first place. How so? Simply put, for a brief moment I lived their music. There’s nothing like witnessing dreams come true while listening to a killer live soundtrack. Coming back to my corporate cubical jungle, I was much more aware of the calmness and stillness that consumed my daily work tasks. It was like someone suddenly muted my existence. Fortunately, my ears were still ringing from the music of days past, and that left a grin on my face that no one around me could ever fully understand. For that, I knew the lyrics I heard on tour would be forever tattooed in my heart.

Words and Photography by Angela RoseRed